San Diego, Calif., April 3, 2015 — Just in time for Passover, a new volume documenting research pertaining to the Bible's grand narrative about Israel’s Exodus from Egypt has been published by Springer Publishing Company. 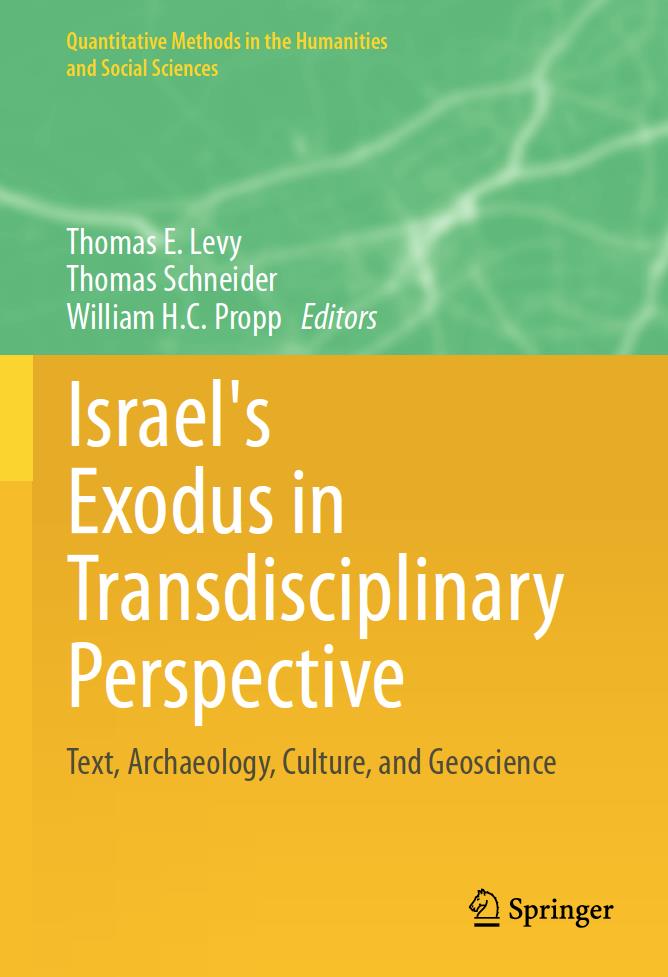 The book, “Israel's Exodus in Transdisciplinary Perspective - Text, Archaeology, Culture, and Geoscience,” comprises research presented at a 2013 symposium held at the University of California, San Diego Qualcomm Institute (QI), "Out of Egypt: Israel’s Exodus Between Text and Memory, History and Imagination.” The symposium included a QI-designed exhibition, "EX3: Exodus Cyber-archaeology and the Future," which showcased alternative interpretations of the Exodus using high-tech display tools in a museum-of-the-future setting.

"It has been more than 20 years since an international symposium concerning Israel's Exodus from Egypt has taken place,” said Thomas E. Levy, distinguished professor of Anthropology at UC San Diego and the associate director of the QI Center of Interdisciplinary Science for Art, Architecture and Archaeology (CISA3). “That has now changed and this new book project about the Exodus has brought together a team of international researchers to investigate one of the most enigmatic stories ever told.”

Levy's editorial colleagues for the book were Thomas Schneider (University of British Columbia) and William Propp (UC San Diego). Added Levy, "Our managing editor, Brad Sparks, did a yeoman’s job of checking every detail from archaeology, to Egyptology, to Hebrew texts."

The book appears in Springer’s new book series, ‘Quantitative Methods in the Humanities and Social Sciences.’  Levy notes that the transdisciplinary (team science) approach taken in the book (and emblematic of the research approach at QI) made this project especially attractive to Springer.

Levy added that the combination of 44 contributions by an international group of scholars from diverse disciplines makes the book the first such transdisciplinary study of ancient text and history. One of the chapters was written collaboratively by a number of Qualcomm Institute-affiliated researchers, including David Srour, John Mangan, Aliya Hoff, Todd Margolis, Jessica Block, Matthew L. Vincent, Thomas A. DeFanti, Falko Kuester and Levy.

“In the original conference and with this new volume, revolutionary media, such as a 3D immersive virtual reality environment, impart innovative, Exodus-based research to a wider audience,” Levy continued. “Out of archaeology, ancient texts, science and technology emerge an up-to-date picture of the Exodus for the 21st century and a new standard for collaborative research."

Levy noted that new developments in cyber-archaeology (the marriage of archaeology, computer science, engineering and the natural sciences), new  archaeological discoveries and syntheses and the rise of transdisciplinary (team science) in the archaeology of the Holy Land make it possible for 'scientific storytelling' to strengthen understanding of the relationship between a sacred text and the archaeological record.

"The Bible's grand narrative about Israel's Exodus from Egypt is central to Biblical religion, Jewish, Christian, and Muslim identity and the formation of the academic disciplines studying the ancient Near East,” he explained. “It has also been a pervasive theme in artistic and popular imagination. ‘Israel's Exodus in Transdisciplinary Perspective’ is a pioneering work surveying this tradition in unprecedented breadth, combining archaeological discovery, quantitative methodology and close literary reading.

“Archaeologists, Egyptologists, biblical scholars, computer scientists, geoscientists and other experts contribute their diverse approaches in a novel, transdisciplinary consideration of ancient topography, Egyptian and Near Eastern parallels to the Exodus story, the historicity of the Exodus, the interface of the Exodus question with archaeological fieldwork on emergent Israel, the formation of biblical literature, and the cultural memory of the Exodus in ancient Israel and beyond," he continued. "The book takes a truly ecumenical approach to a very complex sacred narrative explored though the lens of Jewish, Christian and Islamic thought enhanced through this new transdisciplinary approach."